Lawyers take false comfort from the fact that they cannot conceive of robots doing their jobs.  There are even websites where you can plug in a profession and see what the chances are of being rendered obsolete by automation.  Sure, there may be robot factory workers, driverless cars, robotic mass transit, and even robot surgeons, the reasoning goes, but the skills of lawyers, welI, that’s another story.  This failure of imagination is best summarized by the oft-quoted line from futurist and science fiction author Frederik Pohl who said: “A good science fiction story should be able to predict not the automobile but the traffic jam.”

Let’s start by imagining a world in which factories have few workers. This should not be difficult: check out the photos of a present-day Tesla factory. 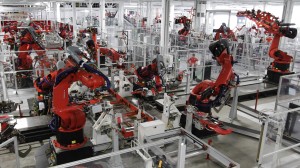 The reflexive response of colleagues is something like this: “Well, I don’t do that much workers’ compensation work anyway.”  As Pohl might put it, they see the “automobile” but not the “traffic jam.”

Yet, if we follow the impacts of a workerless factory, we must first recognize that reduction in the labor force will reduce not only the number of factory workers and workplace injuries, but the number of workers compensation lawyers, as well.  Those now idled lawyers will now be looking to perform other work, perhaps personal injury cases.  Enter the era of the driverless car.

The non-partisan ENO Center for Transportation, relying on National Highway Traffic Safety Administration (NHTSA) data estimates that driverless cars could  save 21,700 American lives annually and result in 4.22 million fewer crashes out of 5.5 million crashes per year in the United States.  Those displaced workers compensation lawyers will be joined by tort lawyers in the face of an inevitable reduction in auto collision cases.

If you do not regard driverless cars as likely despite the estimated comprehensive cost savings of $355.4 billion, consider the present day driver-assist packages including: radar based cruise control system that can maintain a set speed while also slowing for traffic ahead; blind spot assist; lane keeping assist and active lane keeping assist that can brake to help keep you in your lane; collision preparation that prepares your car for an accident by tensioning the seat belts, closing the windows and roof, and positioning the front seats; collision prevention systems that monitor the distance between your vehicle and the one in front of it, warning the driver and preparing the brakes for an emergency stop; steering assist; brake assist; and pedestrian detection programs. Whether cars are actually driverless may soon become a distinction without a difference in a world where drivers leave the driving to Robby (the Robot)(featured in the film, Forbidden Planet (1956)).

By any calculation, the one in twelve drivers estimated to be intoxicated in certain neighborhoods after midnight are unlikely to be replaced by an equal number of drunk, negligent, or commandeered or “hacked” robots.  This area of tort representation will dwindle much as the longshore injury cases have since the 1960’s when containerization supplanted the riskier break bulk cargo.

A number of benign trends such as democratization of information on the internet, the increase in pro se and self-representation, the decline in jury trials and the growth in alternate dispute resolution, and the advent and expansion of functions performed by Limited Practice Officers (LPOs) and Limited License Legal Technicians (LLLTs) all converge to reduce the scope and necessity for a legal profession as it currently exists.  It is unlikely that the future will be able to sustain lawyers at their current levels of about one-half of one percent of the population of the United States.

While artificial intelligence outright replacing lawyers is a ways off, the scope and volume of legal cases will continue to decline as areas of legal work evaporate.  Our economy and society is being transformed by increasingly competent technologies.  Whether it will usher in an age of comfort and leisure or one of anxiety and massive unemployment remains to be seen.  The legal profession will likewise be under pressure – along with the rest of humanity – to demonstrate its continued competence and usefulness.